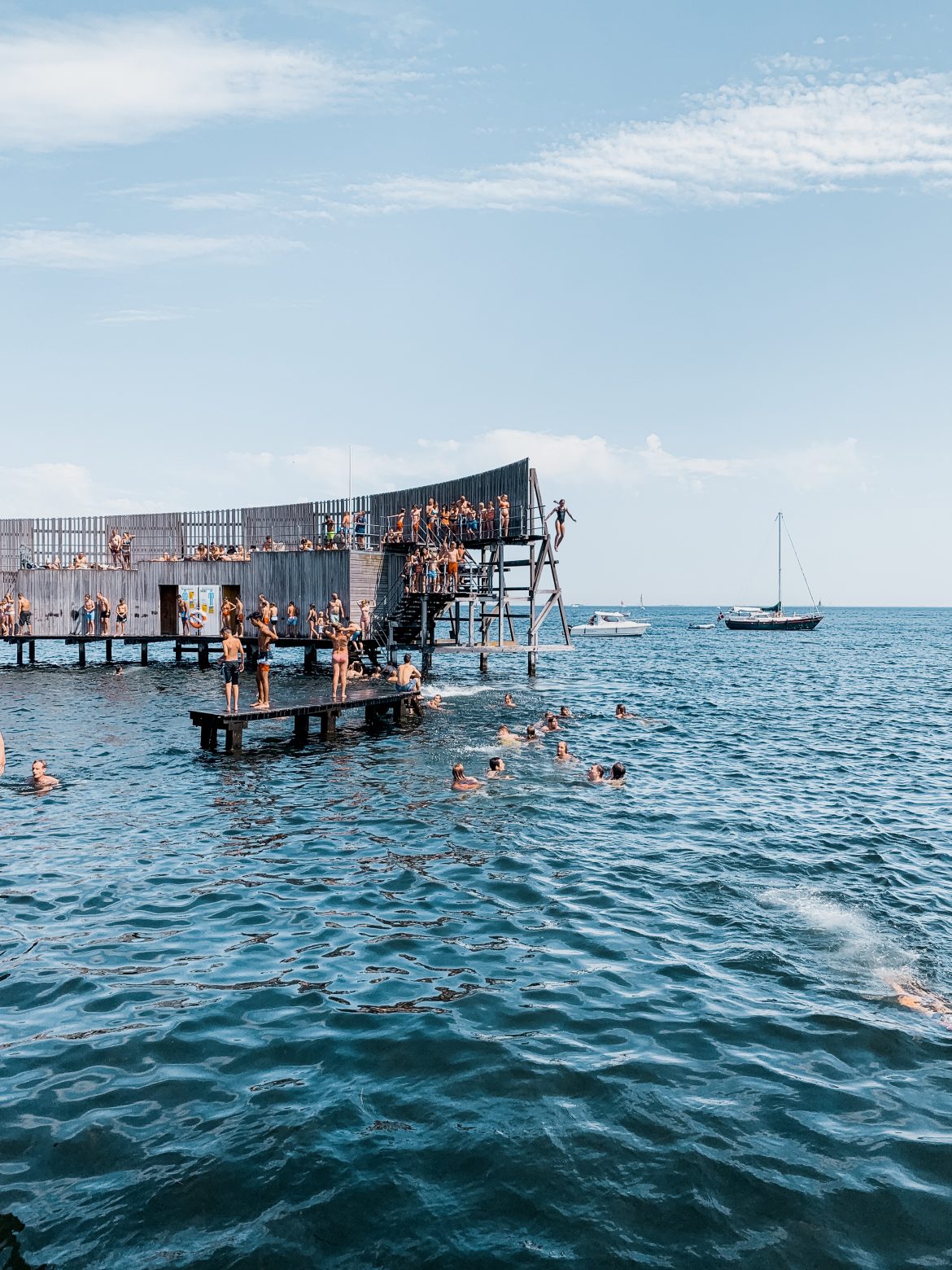 When I decided to move to Finland, one of the things I was most excited about was getting to explore Europe. There are so many countries that are just a short flight or ferry away. For instance, in my past visits to Helsinki, I did a ferry ride to Estonia and cruise ship to Sweden. There’s also one that goes to St. Petersberg in Russia. In LA, you can take a ferry to Catalina island, and the only other short cruise ship would be to Baja, Mexico, which I have fond memories of!

Anyway, I had a girlfriend from back home who was staying in Brussels, so we decided to meet up in a country we’ve both never been to… Denmark, specifically Copenhagen. We are both really into art and design, so it was a no brainer. Denmark has consistently been rated the happiest country in the world, although they’ve fallen 2nd to Finland the last two years (woot woot), so I was excited to see what it was like in another Nordic country. Sidenote, I almost said Scandinavian country, which is something I’ve been confused by since I moved here. Is Finland considered Scandinavian? Apparently Sweden, Norway, and Denmark are Scandinavian and Nordic countries, while Finland and Iceland are just Nordic, but I get mixed answers when I ask a Finn. This article has been helpful with this debate in case you’re interested.

Back to Copenhagen. I absolutely adored this city! I think we got to see it at its best, as the weather was perfection and it seemed like the entire city was outside. The primary mode of transportation here is cycling, so we rented bikes for the entire 3 days we were there. The city is small enough that you can get around on bikes alone, but there’s also metro, bus, train, uber, and electric scooters. We biked the heck out of that city and for me, everywhere I looked was drool worthy. I really liked the mix of old and modern architecture surrounded by the sea and forest.

I probably wasn’t there long enough to make an accurate conclusion, but the Danes truly did seem happy. Everywhere we went, people were laughing, hugging, and just having a good time. Whether it was laying out in the middle of a park reading a book, having a beer on a terrace, or jumping into the sea. It was intoxicating.

The Danes I met seemed to really love their city. Since I’m a bit afraid of my first winter in Finland, I asked one local what they did in the winter. She said that winter is a great time to be inside and not feel guilty about binging on Netflix, and doing all the cozy indoor things. She was talking about “Hygge” which I recently learned about from one of my friends back home ironically. Hygge encompasses a feeling of cozy contentment and well-being through enjoying the simple things in life. I loved her outlook on winter so much, that I decided to pick up this book on it. The author also wrote a book on Lykke, which is the Danish word for happiness.

Ok, enough of the happiness talk, here’s a rundown of what we saw, did, and ate. I also included a list of things we wanted to do, but didn’t get a chance to.

Things to do in Copenhagen

Designmuseum Danmark – I died and went to design heaven here. If there’s one thing the Danes are known for besides pastries, it’s their design and furniture. I just got lost in there and wanted to take home every vintage chair! They also had a Bauhaus exhibit which had a workshop that you can practice your own artistic skills in. Oh and don’t forget to stop by the gift shop. I wanted to buy everything from ceramics, books, and artwork to rings, scrunchies, and pantone water bottles. Highly highly recommended!

Nyhavn – The 17th century waterfront, canal, and entertainment district with the colorful buildings that you see in every picture of Copenhagen. It was super crowded and touristy, but still worth it to see. I wouldn’t recommend eating there.

Cisternerne – The Cisterns was a water reservoir that once contained the supply of drinking water for the Danish capital and today is an exhibition space for contemporary art. The current exhibit was by the Danish artist collective SUPERFLEX where they flooded the dripstone cave with water (don’t worry rain boots are provided) and portray how climate change has altered society drastically. This was also a must see for me. It was a bit creepy, but the most unique and interactive exhibit I’ve ever seen.

La Banchina – This place was highly recommended by our friend who lives in Copenhagen. This is one of the city’s best spots for sunbathing and jumping in the water when it’s warm. In the winter they have a wood-fired sauna (proper Finnish style) which is perfect after a cold dip in the harbor I’m told. I’m not sure I could brave that water in the winter, I could barely get in it in the summer.

Kastrup Sea Bath – On our last day in Copenhagen, we decided to skip all the touristy spots, and just enjoy the sun. Now that I’m living in the Nordics, when there’s sun, you must soak it all in as there aren’t too many days in the year that you get good weather. This was another local recommendation. The circular structure has seating around a seawater pool. It was an architectural pearl, and the perfect place to go for a swim and hang out at the public beach.

Dandy – This was a hip bar near our apartment with a 60’s art deco Hollywood feel. We went on a Thursday night so it was pretty quiet, but they had a mean tequila and mezcal cocktail which I have been craving since I moved to Helsinki. I haven’t been able to find any good tequila or mezcal since I’ve moved here (so if any of you Finns have tips, do share!). There’s a DJ and dance floor on the weekends, and I hear it can get quite busy.

Meatpacking District (Kødbyen) – Unlike New York city, which it was modeled after, the neighborhood is still home to butcheries and slaughterhouses. This is where the cool kids hang out and is a hub for nightlife, galleries, and restaurants. We just dropped in for a drink at one of the bars, but it seemed like a bit of a younger crowd to us. There is also a grittier side of the meatpacking district where they have supervised injection sites so the locals told us just to be careful around those areas, but that nobody would bother us. All in all, I never felt unsafe anywhere in Copenhagen, which is a similar feeling I get in Helsinki.

Jægersborggade – This is an adorable street in the Nørrebro neighborhood with art galleries, organic produce shops, vintage clothes, ceramics and jewelry designers, wine bars, coffee shops and restaurants. Here you’ll find Michelin-starred restaurant Relæ, Coffee Collective (some of the best coffee in town), and the only caramel cookery in Copenhagen.

Christiania (Free town) – Christiania is a community of about 900 people that has its own rules and regulations completely independent of the Danish government. At first when you enter on Pusher street, it appears to be all about weed, but that is just a minor part of the town. Once you go deeper, you’ll see the most interesting and artistic homes. The area is also known for delicious vegan restaurants and free concerts.

Arket – I didn’t get to go to one of their main locations, but I did stop by their shop in the airport. Arket is a fashion brand owned by H&M which started in Sweden. It has a Scandinavian aesthetic and aims to provide quality and sustainable basics, with a price point more similar to Cos than H&M.

What to eat in Copenhagen

Det Rene Brød – First order of business was to try the most typical Danish pastry which is the Wienerbrød. Interestingly enough, this translates to “Vienna bread” because the concept was brought to Denmark by Austrian bakers. In the US, we simply call these a “Danish”, so it came as a shock that it actually came from Austria. Well wherever it came from, it is damn delicious. This bakery has several locations and a great place to try one out.

Restaurant Koefoed – After much googling about what to eat in Copenhagen, the Smørrebrød came up as the traditional dish. It is an open-faced sandwich made typically made with a buttered rye bread and topped with meats, fish, cheese, spreads, or whatever your heart desires. Restaurant Koefoed is especially known for these, and I can testify that we picked the right spot to try these, delicious!

Conditori La Glace – The oldest confectionary in Denmark. My girlfriend and I have major sweet tooths, and this place did not disappoint. I am more into cakes and my friend was more into tarts, and both were to die for!

Sanchez – One of the things I miss most in Helsinki is good Mexican food. Since my friend also lived in California, we both were craving it. Finally, my Mexican cravings satisfied! The only disappointment was the price, as I’m used to my $1 Taco Tuesdays.

Coffee Collective – World Barista Champion and twice national champion Klaus Thomsen is behind this place. Their filtered coffee was incredible, probably the best cup of joe I’ve ever had. Not to mention the mushroom toast and Wienerbrød we had were also on point.

Torvehallerne – An indoor food market selling everything from fresh fish and meat to gourmet chocolate and exotic spices. Admittedly, we didn’t have time to buy anything or eat there, but all the smells and food gave me the feels. I would have loved to pick up a bunch of food from here and have a picnic.

Even though the city was small enough to bike through, I feel like I barely scratched the surface (as you can see from the list of things we didn’t get to do). I definitely want to come back. I would love for the opportunity to live in other European countries, and if the chance came up, this city would be on the list, along with Barcelona, Paris, Amsterdam and Berlin so far…